Deprecated: The $control_id argument is deprecated since version 3.5.0! in /home/customer/www/dennisboatworks.com/public_html/wp-content/plugins/elementor/modules/dev-tools/deprecation.php on line 301

Yachts are often a second home and owners will spend days or weeks on the vessel traveling the coasts. When so much time is spent in a second home, it should have every feature and benefit of the first home, if not more. Whether you need custom marine cabinets, tables, bookshelves, wine storage, or any other custom woodworking project, the skilled experts at Dennis Boatworks can do it all. Located in Fort Lauderdale, FL, we provide custom yacht carpentry throughout the area and can access dozens of marinas.

Schedule a consultation with us today 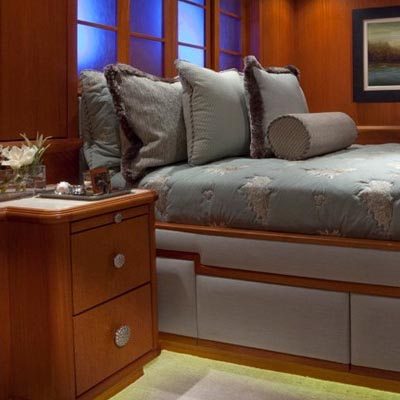 At the time of this writing, the death toll stands at 28.

The cause for the accident is still being determined. Right now, all efforts have been on clearing the site, bringing in heavy lifting construction equipment, allowing the clearing of rubble and the continued look for survivors who may be still trapped underneath.

“The heavy equipment is now able to move around the site as needed,” Surfside Mayor Charles Burkett said. “The looming threat of that building, the dangerous situation where debris could fall down is now eliminated, so we are operating at 100% capacity. And I am very excited about that and I … sense that the families were too.”

Humans have marshalled together. The rescue team is comprised of an expatriate teams from Israel. Local teams include Florida Task Force 1, which consists of Miami-Dade Fire and Rescue firefighters and three other task force teams from the state.

I, the writer for Dennis Boatworks (and narrator of this here moment) wish to pin the blame on Shoddy Workmanship.

I don’t care to know who benefitted from the poor workmanship of the Champlain Towers. But I do.

That’s right, I said it, “Shoddy Workmanship.” Whether the contractor did it, or the boss who hired him, or the unpaid worker who was never properly taught to mix concrete, the reason for the collapse is shoddy workmanship.

And so as the dust still clears, and bodies are still being recovered from the rubble, I, human being, demand an explanation. Many are still missing; ‘Why are they missing?’ ‘Was the building up to code?’ ‘Was it built to sustain that many people?’ ‘What happened?’ ‘Who did what that incited the building to fall?’ ‘What was the straw that broke the camel’s back?’ If a building was a construction, then who stood the most to gain from its being erected? Which teams benefitted from cutting the most corners?’

In real estate, the contractor blames the foreman, the foreman blames the workers, and the workers blame the material makers. The material makers blame the rising cost of raw goods, and the raw good suppliers cut their product with the cheap crap from China (pardon my French, but remember the 1990’s {Chinese dry wall}), and we, the American people of South Florida who paid our rent this month can’t go to sleep because we’re wondering who benefitted from cutting all those corners. And we wonder, (I wonder), “will my building be next?”

So when I blame “shoddy workmanship” I do so to take the sting out of the moment. Because the job can be better. The job can always be better.  If the person before you didn’t do their part of the job, say something. Because we’re building structures here people – and I don’t care if you’re building using brick, concrete, code, paint, text, music, or manure – but build with your tool and build with it well, because people’s lives are at stake here! If you see something, say something. “It’s amazing how much can get done when you don’t care who gets the credit.”

Call it a PR stunt. Call it “use of excess capacity” but Royal Caribbean Group has chosen to donate space in the form of lodging, rooms and amenities, along with food for the people displaced in the accident as well as extending the help to first responders and search and rescue teams.

More on this story at Fox

“This incredible act of kindness and generosity from our friends at Royal Caribbean is deeply appreciated by our entire community,” Miami-Dade County Mayor Daniella Levine Cava said according to WTVJ-TV. “Over the past nine days, our first responders have been working under dangerous, stressful conditions to move our search and rescue mission forward through so many unprecedented challenges.” – Fox News

For that we are thankful.

If you’re a boat owner and you reside in Palm Beach, Boca, Fort Lauderdale, or North Miami, our expert carpentry team can help you with any project. Our shop is located in Oakland Park, Florida. We service South Florida marinas with yacht carpentry and boat carpentry services. Our team comprises of master woodworkers and millworkers who work in our wood shop, on spec, on time, and on target – to deliver high quality custom furniture for the maritime industry. No Shoddy Workmanship here folks!

Check out our gallery & get some ideas for your next renovation project.

Read our Google Reviews to prove it.

The epitome of yacht carpentry is being able to create a look throughout the vessel with a combination of feature pieces and small details that are all brought together in a cohesive style. Through a foundation of craftsmanship and elegance, Dennis Boatworks in Fort Lauderdale will ensure that your yacht represents an exceptional level of luxury. 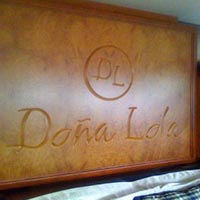 From small details on hand rails to wainscoting and more, if you?re looking for the finest details that add character and enhance the personal style of the yacht, our team has the skill and the equipment to pull it off. We can complete unique designs and patterns on decks, seating, walls, and more. 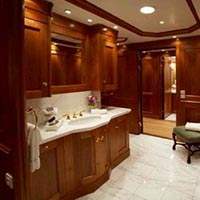 Both functional and stylish, the technical skill that our staff has to offer really shines through the pieces we can create for your yacht. At the most basic level, custom yacht cabinetry is storage for guests and crew on the vessel. We strive to take our carpentry services to the next level by providing unique solutions to your needs. Whether it?s creating separate seating areas on the deck, constructing a bed with storage below, or designing unique bathroom cabinets, we?ll put your needs and style first. 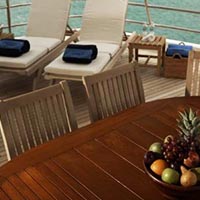 Gathering around a table for a fine dining experience or lounging around a table on the deck for brunch, Dennis Boatworks approaches each situation as an opportunity to create a stunning piece of custom yacht carpentry. Tables aren?t just functional, but a piece where people can spend time together, whether it?s playing cards, enjoying a meal, or discussing the events of the day. Tables we build, whether large or small, display our carpenters true talent and attention to detail. 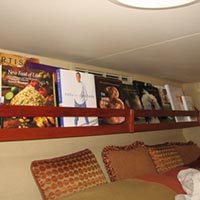 An overall design really comes together in the small details and finishing touches. Wherever you wish to lounge and relax reading a book, a bookshelf is a perfect chance to showcase fine details. Whether you?re storing rare first editions or simply books from your favorite author at the time, we will create the perfect home for your most prized possessions. 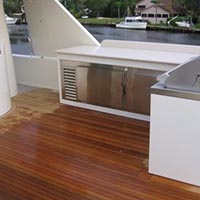 Known for its durability, strength, and unique brilliant color, teak is an excellent choice for decking repairs. Our yacht carpenters can create a custom design based on your style, the design and layout of the yacht, and we?ll ensure that there is a seamless appearance between any existing and newly installed decking. After decades of working and repairing yacht decks in the Fort Lauderdale area, we have a thorough understanding of the importance of sound construction and reliability. And we have the equipment, skill, and knowledge to achieve flawless construction. 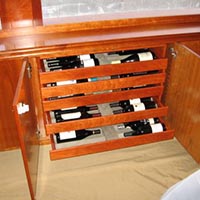 Given the temperature requirements for both red and white wine, there is a unique challenge in creating storage that is both functional and beautiful. We can create custom solutions for your wine storage needs by designing pull-out drawers, wine closets, or even built-in storage underneath bed frames. We also offer solutions for glassware and cutlery storage to ensure that all of your items are safe and secure.

There is a certain beauty in recognizing the life a yacht has lived on the water and being able to see it?s history in the woodwork. However, a refinished deck, railing, or gunwale truly inspires a renewal of life and excitement for the future. Dennis Boatworks has a controlled environment spray booth, offers matching color and finishes, on-site repairs and faux finishings, and cap rail varnishing that will breathe new life into your vessel.

"The quality of work and level of professionalism is outstanding."

When providing custom yacht carpentry services, we are passionate about building and maintaining strong relationships with our clients and suppliers. A yacht may need several upgrades, refinishings, or redesigns in its lifetime, and we hope to be there through that journey.

We strive to provide a level of excellence on every project and in every detail. Our custom yacht carpenters are passionate about what they do and take pride in being able to offer beautiful details in every piece.

We know how important it is to complete a project on time and within budget. We can guarantee that our carpenters will arrive at the marina on time and offer dedicated work, doing their best to complete the job as scheduled so you can get back to enjoying the open waters of Fort Lauderdale and beyond.

From start to finish, we treat our clients with respect and offer professional services each and every day. It means a lot to us that you are truly satisfied with our work, and we will do what it takes to ensure your satisfaction.

Whether you?re looking for custom yacht cabinets, a detailed design on a railing, or if you need the deck refinished, we do everything with a focus on each detail, ensuring that the entire project or piece is flawless. We are perfectionists in everything we do and aren?t satisfied with anything less.

Dennis Boatworks specializes in custom yacht carpentry and we are passionate about providing exceptional service and craftsmanship for every client and on every vessel. Located in Fort Lauderdale, we provide custom carpentry services throughout the Southeast Florida area. Whatever your needs are, you can be confident knowing that you?re getting a team of professionals dedicated to their craft.